Skip to content
What is the goal of the program?

The goal of WIN is to give people a second chance. For decades, communities, foundations, and individuals have sought ways to take people from welfare to work. While it is clearly too early to say our approach is working, it is not too soon to conclude the attitudes of those in the WIN initiative have changed. Moreover, we have been told by contractors and building trades association executives there is nothing like WIN in the marketplace. As they have said, one can find each of the elements of WIN elsewhere, but no other program combines all of them.

For far too long, individuals have been left by the wayside. We feel we have a contribution to make to address this nagging problem, and we want to try to make a difference.

Who are the participants?

Students in the program have been as young as 17 and as old as 60. Age is of no concern to us. Our concern is simply that participants have an interest in changing their lives, since we feel, if students put in the effort, they will be able to improve significantly their opportunities.

What communities are involved?

Founded in Schenectady, New York, the city in which the foundation is headquartered, WIN will, once the model has been proven to work, gravitate to other communities in New York. Should the program be successful in New York, we would be open to taking the model to other states.

What is the length of the program?

The first class of students spent 18 months in the program. Since we do not provide stipends for participants, we found students were dropping out for financial reasons. For that reason, and because we felt we could provide the basic skill set graduates would need to be gainfully employed in roughly 12 months, we adjusted the length of the program.

What are the results to date?

Our efforts have underscored the difficulty of dealing with this problem and the fact there are no quick fixes. Our first class had a 10% completion rate; our second class graduated 28%; and our most recent class had a graduation rate of 70%. Clearly, the trend line is a positive one; just as clearly, though, we have a long way to go before we will be ready to declare success. Still, we are very much encouraged by the increasing graduation rates and the reactions of those in the program. 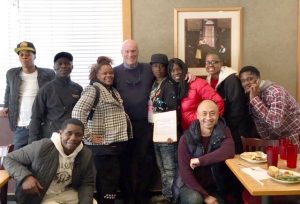